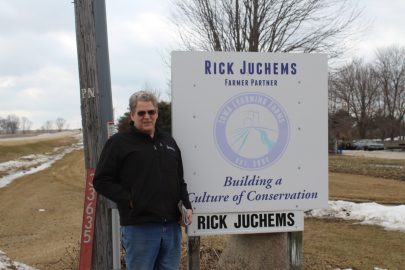 When Rick Juchems first got started in farming in the early 1980s, he wasn’t much into conservation.

“I was just trying to survive,” he said.

But his mind began to change after a heavy rain one spring washed away his newly tilled and fertilized soil, and he thought to himself, “there’s got to be a better way.”

Fast forward to today, and he calls himself a “conservationist at heart.”

Juchems owns a 600-acre corn and soybean operation in northeastern Iowa, right next to the Cedar River. He is one of the farmers who stuck out the ten years of a newly published study by Iowa Learning Farms and Practical Farmers of Iowa on the effects of cover crops on corn and soybean yields.

The decade of data show no notable negative effects on yields. What is notable, and a testament of the ultimate gains, is that several of the farmers dropped out of the study after its initial four years because they were too eager to plant their entire acreage in cover crops.

The farmers were asked to plant strips with and without cover crops for comparison. While Juchems said being part of the research added extra time to planting and harvesting – the researchers needed to take yield measurements, for example – the opportunity to test cover crops in a real-world setting was worth it.

“The research needed to be done, so we can show that you’re going to get good yields even though you put down cover crops,” said Juchems. “I can look at my fields that have been cover cropped now for ten years and look at my neighbor’s, who has worked his ground, and my water is not running off while his is ponding.”

Juchems first entered the study out of curiosity to see what cover crops would do. In the end, he said he is “plenty happy with how it turned out.”

In fact, he had been among those tempted to drop out early so he could plant his whole field in cover crops, but the researchers were able to convince him to maintain his strips and stay in the study.

“I am hoping there’ll be more people who adapt and use cover crops, because I think they’re one of the easier things we can do to improve our water quality,” said Juchems.

Better water infiltration, which contributes to reduced nutrients loads and cleaner water, is just one of the ways cover crops have improved the quality of Juchems’ soil.

“Weed control was probably my biggest thing. I can tell exactly where cover crops were spread and where they weren’t spread,” said Juchems, explaining that cover crops act like a mulch. 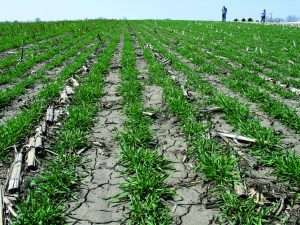 One year, his stand of rye cover grew over three feet tall, which got some neighbors talking.

“By the time August or September rolled around, it was just a nice mat on the ground, and it combined very easily and had very little weed pressure. There were no questions that it helped,” said Juchems, adding that he got 62 or 63 bushels of soybean off of those rye-covered strips that year.

The biggest lesson Juchems learned from participating in the study is that cover crops are not hard to do.

“There’s no real drawback to it. Once you get started in it, it’s pretty simple to adapt to,” he said.

For farmers who are interested in getting started in cover crops, Juchems recommends starting at a small scale. If you aren’t looking to change your operation much, he suggests planting oats; and if weed control and soil protection are your priorities, he says cereal rye is easy to grow and easy to terminate.

“I feel the longer you’re in it, the more you appreciate what cover crops can do for you,” he said. “It’s kind of like raising livestock. You don’t want to jump in and out all the time. You want to get in it and stay in it, and let things happen.”

Juchems’ conversion to conservation has entailed more practices than just cover crops – prairie strips, filter strips, and grassed waterways are among those on his farm. He has also taken on numerous leadership roles, including serving as a Butler County Soil and Water Commissioner for years, working his way up to president of Conservation Districts of Iowa, and now on the board of directors for the Iowa Soybean Association.

His leadership has also entailed sharing what he has learned with other farmers, including helping several neighbors get started in cover crops.

“If I can help other people see that cover crops work, and we can get those integrated into their system so it’s not even a thought, but one of those things they’re just going to do regardless, I mean, that’s a win-win for the farmers and for the people downstream,” said Juchems.