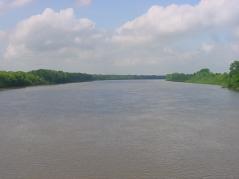 Photo Credit: The University of Illinois

Reducing the nitrate and phosphorus loads in the Mississippi River by 45 percent is the US EPA’s ultimate recommendation. This will serve to reduce the size of the seasonal hypoxic area, or “dead zone,” created in the Gulf of Mexico when nitrate in tributaries like the Illinois River flows into the Mississippi River and down to the Gulf. Illinois has developed strategies to achieve these reductions described in the Illinois Nutrient Loss Reduction Strategy. Other Midwestern states have developed similar strategies.

“The recent reduction in nitrate load in the Illinois River is a promising sign,” says Greg McIsaac, U of I researcher and lead author of the study. The study was completed last October, before data for 2015 were available. “Now that these data are available, we know that the Illinois River nitrate load from 2011 to 2015 was 15 percent lower than the load measured in the baseline period from 1980 to 1996. This 15 percent reduction is a milestone that the state hoped to achieve for all its rivers by 2025,” he says.

In addition to examining trends in nitrate loads and concentrations in the Illinois River from 1976 to 2014, the authors tried to identify reasons for changes in loads and concentrations. One possible source of change considered was nitrate in treated wastewater discharged into the Illinois River by the Water Reclamation District of Greater Chicago from 1983 to 2014. The authors also used annual records of fertilizer sales, livestock numbers, and crop yields to calculate residual agricultural nitrogen for each year—that is, the nitrogen made available to crops in fertilizer, manure, and biological fixation, but not absorbed by the crop or harvested in the grain.

“A significant portion of this residual nitrogen is left in the soil as nitrate and can be washed into the river, primarily through groundwater and subsurface drainage tiles in agricultural fields,” McIsaac says.

Mark David, U of I biogeochemist and co-author of the study, says the residual agricultural nitrogen was highest in the late 1980s, following a major drought and low corn yields in 1988.

“Beginning around 1990, the residual agricultural nitrogen began to decline, most likely due to improved fertilizer management and higher corn yields. Since 1980, the amount of nitrogen fertilizer sold in the watershed remained relatively constant, but corn yields increased by about 50 percent,” David says. “This means that more of the nitrogen fertilizer applied was taken up by the corn and harvested in the grain and less was left in the soil or washed down the river.”

From their analysis of the data, the team found that annual nitrate loads were significantly correlated with river flow, nitrate discharged in Chicago wastewater and residual agricultural nitrogen averaged over a six year window. Nitrate concentrations – the average weight of nitrate in a typical gallon of river water – were also correlated with residual agricultural nitrogen and nitrate discharge from Chicago, but not river flow.

Another one of the study’s co-authors, U of I biostatistician George Gertner, is cautious about the findings. “Although the correlations we found are statistically significant, they are not definitive proof that the reductions in residual agricultural nitrogen or nitrate discharge from Chicago caused changes in nitrate concentrations or loads in the river. The results are, however, strongly suggestive of the connections.”

Nitrate loads are strongly influenced by precipitation and river flow which can be highly erratic. “It is promising that nitrate loads have declined in recent years despite higher than average river flows. The five-year average river flow from 2007 to 2011 was the highest recorded since the start of measurement in 1939,” McIsaac says.

Whether nitrate concentrations and loads continue to decline in the future depends on several factors, according to the researchers. “If the annual river flows return to their 1976-2005 average values, and if nitrogen fertilizer efficiency remains high or continues to improve, there likely will be a decline in nitrate loads in the Illinois River,” David explains. “On the other hand, if river flows remain high, which may be a consequence of climate change, meeting the nitrate reduction goals will likely require more conservation effort than originally proposed.”

The study, “Illinois River nitrate-nitrogen concentrations and loads: Long-term variation and association with watershed nitrogen inputs,” written by Gregory F. McIsaac, Mark B. David, and George Z. Gertner, is published in the Journal of Environmental Quality and available through open access at https://dl.sciencesocieties.org/publications/jeq/pdfs/0/0/jeq2015.10.0531.