The role of the social structure in the farming world has evolved immensely in my short time on the farm.

When I was a young boy growing up on a farm in Cotton Plant, Arkansas, my brother and I would tag along with our father and grandfather to the local parts store in the slow months of winter. We’d sit in the corner drinking sodas while listening intently to the large group of farmers huddled around a stove, talking about the past year and things to come when spring broke. Topics ranged from farming successes and failures to politics, and from new technologies and techniques to hunting stories. That store was a place to share ideas and give a fellow farmer support when needed or criticism when warranted.

This structure still exists today, but, for many farmers, the local parts store has been replaced by social media apps on our phones and other devices. Personal connections have been supplanted by digital ones.

While the digital realm has removed the personal elements of a handshake and smile to the farmer in need, or the accountability to level criticisms, it has also expanded the circle from around the stove to a global network of idea sharing and learning.

In my time as a farmer, my brother and I have completely revamped our farming operation from the excessive-tillage-and-input-demanding thing of traditional agriculture to an efficient, low input, ecologically focused, and profitable enterprise. This was all made possible because of social media and the network to which it connected us.

It all started for us back in 2009 when trying to solve the problem of resistant palmer amaranth, a difficult weed that was wreaking havoc on our farm. I had exhausted all the resources I had at my disposal locally. I had attended multiple meetings that featured university experts, industry experts, and paid consultants, all of which had the same answers for me, all of which were failing.

It was not until I was on YouTube one night, desperately searching for a solution, that I found a potential answer to my problem: no till and cover crops.

It was an answer that had not been mentioned by any of the local experts, and when I brought it up in subsequent meetings, it was dismissed as nonsense. This was mostly because it was not backed by “research,” or because it was an unconventional idea in our area – it did not rely of chemicals or tillage to solve problems, but nature.

I needed to learn more about how to implement these things, and the only place I could turn to was social media. Over the next several months, I developed a network of like-minded farmers from all over the world.

These farmers exchanged ideas with me unconditionally and challenged me when they thought my thinking was wrong. There was no denigration in their criticisms, just an objective view and helpful encouragement to rethink the perceived outcome.

Through these connections, I have made lifelong friends, and my circle of influence is exponentially larger than that of our father and grandfather. I must believe that access to knowledge and ideas is also increasing with every new connection made online.

While these connections are made on a computer or phone, they often lead to in-person gatherings that would not have been a consideration for me and my brother otherwise. We now travel to meetings in different parts of the country to visit with our new friends to trade ideas, successes, and failures. Without social media, none of this would have been possible.

Social media can also be a light when things are dark in your world. If things on the farm are not going so well, you may have someone to talk with who has dealt with similar troubling times. While this person may not be close to you geographically, their distance could keep your private news from spreading in your small rural town.

Currently with the coronavirus pandemic raging, most of the meetings I attend are through some type of social media. I’m not sure where the agriculture industry as a whole would be without its influence, but I know where I would be – still struggling to solve a problem that conventional agriculture still has no answers for and falling quickly toward bankruptcy.

Social media provided me and my brother the information and inspiration we needed to make paradigm-shifting changes on our farm, breaking us out of the input-intensive, small-margin farming model that so many operators are struggling with today. We did not rely on experts, because there were none.

I remember a quote from graduate school by the molecular biologist Jim Watson. He said, “If you are going to try and make big progress, you are, by definition, unqualified to be doing what you are doing.”

Social media provided access to pioneers in regenerative agriculture that forever changed the way we farmed for the better. It provided support when there was none to be had in our small local circle. It is an invaluable tool in this new era of agriculture. 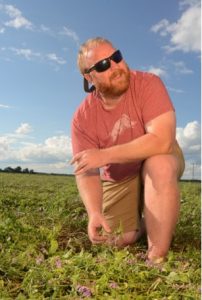 Chappell is a fourth-generation farmer in Cotton Plant, AR. He has been farming with his brother, Seth, growing cotton, corn, soybeans, rice, livestock, and some winter cereals across about 7000 acres for 15 years. He has a BS in Botany from Arkansas State and an MS in Entomology from the University of Arkansas.