The Gulf of Mexico covers approximately 600,000 square miles and is the ninth largest body of water in the world. Coastal wetlands in the Gulf encompass over five million acres (about half of the U.S. total) and serve as important habitat for numerous fish and wildlife species.  Gulf fisheries are some of the most productive in the world. It is home to 141 federally protected species (102 are endangered) including fish, birds, turtles, alligators, coral and plants.

The Mississippi River accounts for nearly two-thirds of the freshwater flows to the Gulf of Mexico. The Mississippi-Missouri River is the fourth longest in the world (3,710 miles or 5,970 km) draining the third largest river basin in the world (1.2 million mi2 or 3.1 million km2) (Figure 1).  More than 72 million people live in the Mississippi River Basin. It is the migration corridor for 60 percent of North America’s bird species and supports 25 percent of its fish species.  The river provides water to more than 50 cities and 18 million people.

Annually, the United States grows more than one-third of the corn and soybeans in the World and much of this production is in the Mississippi River Basin (USDA-National Agricultural Statistics Service). Large amounts of wheat, cotton and rice are grown in the Basin and it contains extensive cattle and hog operations. More than 70% of the nitrogen and phosphorus delivered to the Gulf of Mexico is associated with agricultural activities (Alexander et al., 2008).

It is estimated that prior to 1980 10.4 million hectares of the 18.1 million hectares of wetlands in the Mississippi River Basin were drained primarily to support crop production (Hey and Philippi, 1995). From 1980 to 2005, nitrogen loadings ranged from 0.8 million to 2.2 million metric tons per year. Over the same period, values of phosphorus loadings were between 0.08 million and 0.18 million metric tons per year (Aulenbach et al., 2007). Nitrate load in the Mississippi River increased about threefold from the 1950s to the mid-1990s (Goolsby and Battaglin, 2001).  The high nutrient loads, loss of floodplains and wetlands, population growth, anthropogenic changes to the landscape, increased combustion of fossil fuel, engineering of the river system, and point sources are the primary causes of water quality problems in the Basin, hypoxia in the Gulf, and a decline in the assimilative capacity and resilience of these systems. 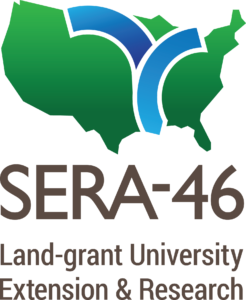 SERA-46 is Southern Extension and Research Activities committee number 46. It is one of a group of formal USDA National Institute of Food and Agriculture (NIFA) and land-grant university funded committees designed to promote multi-state, research and extension activities. SERA-46 was created to operationalize a Non-funded Cooperative Agreement between the Mississippi River Gulf of Mexico Watershed Nutrient Task Force (Hypoxia Task Force) and land-grant university Extension and Experiment Stations in the North Central and Southern Regions of the United States (http://www.nccea.org/, http://asred.msstate.edu/, http://ncra.info/, http://saaesd.ncsu.edu/). SERA-46 brings together researchers and extension specialists, including multiple members of the North Central Region Water Network who share a common interest and expertise related to the environmental, social, and economic factors that contribute to nutrient loss from agricultural lands, state-level nutrient impairments, and hypoxia in the Gulf of Mexico. All extension and research activity committees are approved by Experiment Station and Extension Directors and NIFA and report to them annually.

Promote effective implementation of science-based approaches to nutrient management/conservation that reduces nutrient losses to the environment. Our objectives include:

In May 2015, SERA-46 and the Hypoxia Task Force agreed upon a shared list of priorities for collaboration and these priorities were subsequently updated in September 2017. These shared priorities serve as a basis for projects involving SERA-46 members related to strengthening networks, conservation systems research and outreach, and monitoring and tracking progress toward achieving the goal of reducing the hypoxic zone to 5,000 square kilometers. Example priorities include sharing the latest research on nutrient management and adoption of best practices; identifying common attributes and gaps across state nutrient strategies, highlighting opportunities for cross state information sharing and learning; developing social measures of impact for use in priority watersheds; and strengthening a network of watershed leaders (including those that are farmers) to increase the effectiveness of strategies for reducing nutrient losses from agricultural lands.

In January of 2018 SERA-46 representatives participated in a Congressional briefing in Washington, DC in partnership with the Northeast Midwest Institute discussing the collaboration occurring between land-grant universities, state agencies, and federal agencies through the work of SERA-46 faculty with the Hypoxia Task Force and its Coordinating Committee.  The committee also described on-the-ground research and Extension activities aimed at reducing nutrient runoff into the Mississippi basin and ultimately Gulf hypoxia.