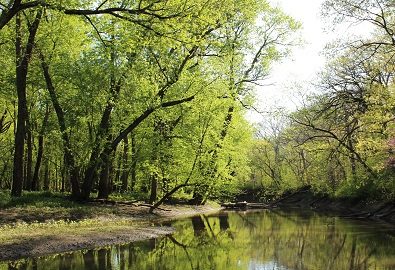 With a population of nearly 13 million people and a major agricultural presence statewide, Illinois is the largest contributor of nutrient loss and runoff from the Mississippi River Basin to the Gulf of Mexico.  While efforts have been put in place to reduce the negative impacts from Illinois’ agricultural systems, the state has limited funding and programs to address the issue. However, by using a partnership approach that relies heavily on private stakeholder groups and builds existing state and federal programs, Illinois has developed a unique nutrient loss reduction strategy that aims to reduce baseline levels of NO3-N and total P by 45 percent.

The Illinois Nutrient Reduction Loss Strategy has had several photo contests to encourage Illinois citizens to photograph their local waterways. This image is courtesy of Paul Gierhart, a past contest finalist.

Illinois’ approach to their nutrient loss reduction strategy has focused on bringing 28 stakeholder partner organizations representing nonpoint sources (agriculture and stormwater), point sources (wastewater treatment plants), interested entities (drinking water plants, environmental/conservation advocates), and government to the table to work together on a committee called the Policy Working Group. This work is led by the Illinois EPA and the Illinois Department of Agriculture.

Eliana Brown has been a key part of this effort since the strategy was written and implementation began. Picking up on past successes, she led the Extension effort under an Illinois EPA grant to write the first biennial report, which was released at the 2017 Farm Progress Show, and coordinated the inaugural statewide nutrient conference last November. Illinois first biennial report adopts Iowa’s template that is based on a logic model including financial, outreach, and land/facility measures and shows multiple aspects of implementation progress within the state. The partners contributed to the report by providing extensive implementation data and by writing narrative updates about their programs.

As the work on the next biennial report gears up, Eliana is expanding on the initial effort by including more information and data on stormwater efforts. Tracking stormwater data is especially challenging –as many projects are primarily funded by private efforts or municipal entities. Brown is working alongside members of the Illinois Nutrient Reduction Strategy Urban Stormwater Working Group to determine successful tracking efforts on the local level, which can be adopted by communities throughout the state. According to Brown, stormwater, which contributes only a relatively small amount of nutrients to the Gulf, can have a large impact on local water resources. Further, it’s important for all partners to know we are all in this effort together. “We all contribute nutrients to our water system, so it is important that we are all a part of the effort to improve Illinois’ water quality,” notes Brown.

In addition to Brown’s multiple programs and efforts in Illinois, this fall she will lead facilitated sessions at a statewide workshop at the University of Illinois Campus that intends to continue Illinois’ progress towards meeting Hypoxia Task Force goals. This workshop will feature the ongoing nutrient loss reduction research efforts, including a poster session which will highlight faculty and student projects in the fields of agriculture, civil engineering, and landscape architecture.

Learn more about Illinois Nutrient Loss Reduction Strategy at the Illinois EPA’s webpage and by following @IllinoisNLRS on Twitter. Eliana Brown is an outreach specialist for University of Illinois Extension Agriculture and Natural Resources and Illinois-Indiana Sea Grant. She is the principal investigator of the Illinois Nutrient Loss Reduction Strategy with a focus on facilitation and report coordination. Eliana also creates educational and outreach products about stormwater management and green infrastructure. She provides guest lectures for the U of I departments of Landscape Architecture and Urban Planning. Eliana received her MS in civil and environmental engineering from the University of Illinois at Urbana-Champaign. She is a LEED AP and a Master Gardener. Follow Eliana on twitter at @elianabrown5.