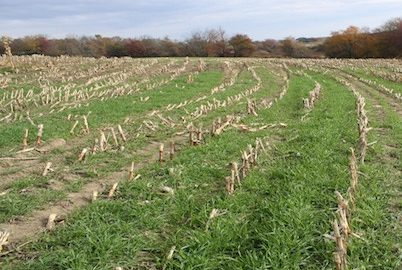 This article was written by J. Gordon Arbuckle Jr., Grant Wall, and Laurie Nowatzke of Iowa State University Extension and Outreach and published on their website. It has been republished here with their permission.

The study, published recently in the journal Water Resources Research, was based on survey research conducted in three Iowa watersheds – the Iowa, Missouri-Little Sioux and Upper Mississippi-Maquoketa – and sheds light on factors related to adoption of cover crops and other conservation practices.

A team of Iowa State researchers in sociology and statistics analyzed data from the ﬁrst two years (2015-16) of a five-year survey measuring Iowa farmers’ awareness, attitudes and actions in support of the Iowa Nutrient Reduction Strategy’s water quality improvement objectives. The Iowa Nutrient Reduction Strategy is a statewide eﬀort that began in 2013 to encourage voluntary adoption of conservation practices by farmers to reduce the loss of nitrogen and phosphorus that contribute to water quality impairments in the Upper Mississippi watershed and drive hypoxic conditions in the Gulf of Mexico.

“Our first analyses focused on adoption of cover crops, because it’s one of the most effective practices for reducing nutrient and soil loss, and has been heavily promoted,” said Laurie Nowatzke, Nutrient Reduction Strategy measurement coordinator at Iowa State and co-author of the study. “So it’s important for us to better understand the factors that influence adoption of the practice here in Iowa.” 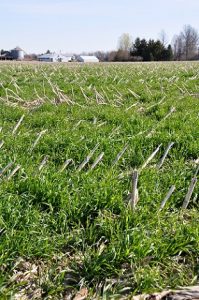 A primary focus of the study was how awareness of and attitudes toward the Nutrient Reduction Strategy and its goals might influence adoption.

“Iowa State University Extension and Outreach and stakeholder partners have put a lot of effort into raising awareness of the Nutrient Reduction Strategy, cultivating positive attitudes toward its objectives and promoting conservation practices, both with farmers and their advisers such as ag retailers,” said J. Arbuckle, associate professor and extension sociologist at Iowa State and study co-author. “Our analysis examined how awareness and attitudes might mediate other variables, such as cost-share or the influence of information sources such as extension specialists.”

The researchers measured the direct effect of key factors influencing cover crops adoption, such as information sources, nutrient management approaches, involvement in watershed management activities and conservation technical assistance. They also analyzed the indirect effects of those same variables as mediated through awareness and attitudes.

Results showed that participation in organized watershed management and receipt of cost-share funds or technical assistance had large positive direct eﬀects on cover crop use. Farmers who had participated in watershed group activities were almost 40 percent more likely to be using cover crops. Those who had received cost-share funds or other conservation assistance in the previous five years were twice as likely to report cover crop use.

“The results showing that farmers who get involved in watershed management activities and conservation networks are much more likely to use cover crops align with previous research conducted in Iowa and other Midwestern states,” said Nowatzke. “This adds to the mounting evidence that watershed-based conservation approaches are effective.”

Results indicated that information sources such as conservation organizations, the farm press and agricultural retailers may have important indirect effects by shaping farmer awareness and attitudes. Farmers who said they learned about the Nutrient Reduction Strategy through public entities such as the Iowa Department of Agriculture and Land Stewardship and through the farm press were about 5 percent more likely to be using cover crops.

“Agricultural stakeholders’ influence on farmers’ awareness and attitudes can impact conservation practice adoption,” Arbuckle said. “So it’s important for all stakeholders to focus on positive messaging and actions that increase farmers’ willingness and capacity to adopt.”

Arbuckle and Nowatzke said the main takeaway from this initial analysis of the Nutrient Reduction Strategy survey data is that getting farmers engaged in watershed management groups and other conservation networks is key.

“Recruiting farmers into such programs and networks takes time, money and other resources,” said Nowatzke. “But our work strengthens research-based evidence pointing to its effectiveness in getting conservation practices implemented.” 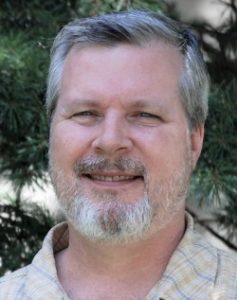 Dr. Arbuckle is an associate professor and extension sociologist at Iowa State University. His research and extension efforts focus on improving the environmental and social performance of agricultural systems. His primary area of interest is drivers of farmer and agricultural stakeholder decision making and action related to soil and water quality. 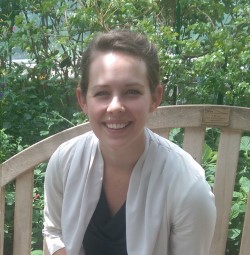 Laurie Nowatzke joined Iowa State University in 2015 as the Measurement Coordinator for the Iowa Nutrient Reduction Strategy. Her work focuses on measuring the progress of water quality improvement efforts in Iowa and tracking the adoption of agricultural conservation practices in the state. In addition, she is a PhD student in the Department of Sociology at ISU.