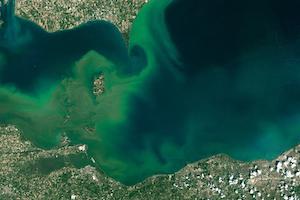 The Gulf of Mexico isn’t the only big body of water that’s been in the spotlight a lot for issues with excessive nutrients and depleted oxygen levels. Lake Erie has perhaps rivaled it for attention in the past few years due to recurrent harmful algal blooms, or HABs.

Ohio is roughly one-third in the Lake Erie watershed and two-thirds in the Ohio River watershed, which is part of the Mississippi Atchafalaya River Basin. No matter your basin, how to deal with HABs is pretty much all the same, says Eugene Braig, program director of aquatic ecosystems at Ohio State University Extension.

Braig, who calls himself an “applied limnological jack of all trades,” has been working in the HABs arena for the past two decades. I asked him to provide a quick snapshot of where Ohio is today in addressing HABs and what innovations are emerging. The following is our conversation, edited lightly for clarity and brevity.

JS: What is the conversation around HABs in Ohio like today, given the attention that’s been cast onto the situation in Lake Erie over the past few years?

EB: Lake Erie has garnered a lot of attention, and it really put this issue in Ohio’s spotlight. So many people depend upon Lake Erie and the natural resources that it represents. Western Lake Erie, in particular, is plagued with these problems, and it has motivated a lot of action. For example, there’s a big program being funded by the governor’s office right now called H2Ohio that is largely to analyze and solve nutrient problems. It started in a big way on the watershed of Western Lake Erie. Now, they’re beginning to move that program down into the Mississippi basin.

In particular, there was a bloom in 2014 – it wasn’t even a very large bloom, but wind put it in exactly the wrong place – and it surprised the Toledo water system, where we actually had toxins getting into finished water. If you know these toxins are coming, municipal water is very good at removing them. So, it was a matter of Toledo being surprised by a small bloom that was exactly in the wrong place and having relatively old infrastructure. And that was a really big wake-up call. The blooms had been going on for a few years at that time…I should say, re-going on, because we had chronic bloom problems before the Clean Water Act and Great Lakes Water Quality Agreement, which largely vaporized after those pieces of legislation appeared. But then blooms had been increasing gradually since.

JS: Can you talk a little about how the conversation around HABs in Lake Erie might apply elsewhere in Ohio, particularly to parts in the Mississippi River Basin?

EB: These things are problematic in – and I’m going to use a technical term because I’m comfortable with it, sorry – lentic water bodies. So lotic water bodies are things like rivers that move. Most cyanobacteria won’t come to bloom concentrations unless they’re in still water bodies, which we call lentic. Ohio has its share of really big problems on lentic waterbodies. One of the biggest, for example, is the Grand Lake St. Mary’s, which is a very old canal reservoir, more than 100 years old, from the era when we built canals to move goods and equipment around. And it is perched on top of the divide between the Great Lakes and the Mississippi watersheds. So, it straddles both watersheds. It has problematic harmful algal blooms to the point that you can actually detect toxins in Grand Lake St. Mary’s year-round. And Grand Lake St. Mary’s is the largest lake in the interior of Ohio, even though it’s an artificial lake. There was a huge business around people vacationing and recreating there that completely disappeared when Harmful Algal Blooms became persistent and problematic. So, it’s not only Lake Erie here. Lake Erie gets a lot of attention because it’s international, but we’re really familiar with this issue all around Ohio.

JS: I’m curious about the H2Ohio program. From your perspective, what do you think are its strengths?

EB: Well, the greatest strength is that there’s willingness to put money into a problem. That’s always the shortcoming of these programs. They often have tremendously good ideas, but no money to implement them. So, this is actually putting money on the ground to restore sites in a way that reduces the amount of nutrients that flow from the landscape to surface waters.

JS: What innovative approaches to combatting HABs are you particularly excited about?

EB: I’m on a very large project right now from the US Army Corps of Engineers that is using ozone nano bubbles as a potential treatment for bloom issues and comparing that to more conventional algaecides.

EB: Ozone is an oxygen compound. So, if you’re out in the great outdoors and breathing air, the component of air that is oxygen has the chemical formula of O2, two atoms of oxygen bound together as a molecule. And ozone is O3. It releases radical oxygen, which is toxic. A nano bubble is just an extremely small, fine bubble. So fine that, in theory, it doesn’t float to the surface. And you release these very tiny bubbles that are made of ozone in the water, and it releases radical oxygen, which is caustic, especially to very small organisms, like the little colonial bacteria that cyanobacteria are. So, it burns them. It’s the same kind of mechanism that hydrogen peroxide works under, like when you get a wound, and you put hydrogen peroxide on it to kill any bacteria that are potentially there.

So, the ozone nano bubble is new technology. And I’m excited to see where it goes. But I’m skeptical until we have some data. I’m not sure if it will outperform more conventional algaecides. HABs do respond to algaecides, which has good and bad aspects to it. But blanketing the world with algaecides, I think, is inherently problematic.

There is a company in Israel that has a patent on a delivery mechanism, kind of a slow dissolve delivery mechanism that renders algaecides buoyant, which is interesting, especially if you have a bloom of an organism like Microcystis, which is buoyant. When conditions are right, it can float to the surface to maximize its intake of sun and prevent everybody else from getting any. So, if Microcystis is drifting around on the surface, being moved around by breezes, and you have a buoyant algaecide, that algaecide is also moving with the breeze. So, it can stay concentrated with its target and be more effective. I’m reluctant to talk too much about this product because it’s a new patent. So, I don’t want this to become an advertisement. I’m eager for it to be on the market long enough that the patent expires.

JS: What do you think it’s going to take to reverse the course of HABs in Ohio and beyond?

EB: That’s a hard one to answer. I think the course can be reversed. Frankly, I think it will probably ultimately come down to regulations that are well designed to both reduce the amount of nutrients that are coming from the landscape and still allow effective food production, because people need to eat. That’s kind of a pipe dream. People inherently dislike being regulated. But people are also not likely to change their behavior unless they have to. I mean, I’ll do as much outreach and education as I can. I’d love to see better buffers around all of our streams. But again, imposing a regulation that forces people to do something with their property tends to be a hard sell.

I’d also love for people to put fewer nutrients into domestic lawns. Everybody can play a part. I think it’s too easy to demonize agriculture. So, you can select products that are less nutrient heavy; you can use less water at home, so that you’re not taxing water processing systems; you can manage your lawn in a way that allows more infiltration into the ground and puts less nutrients on the landscape. All these things are important.

JS: What is one thing that makes you hopeful about addressing HABs in Ohio

EB: That it is getting some real attention and some actual funding right now. I’m hopeful because it’s such a bad problem that people are paying attention to it, which sounds ironic, but there it is. 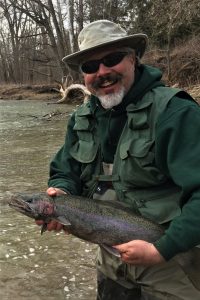 Eugene Braig is a fisheries biologist and Program Director for Aquatic Ecosystems with OSU Extension, and he teaches fisheries management at OSU’s School of Environment and Natural Resources. He represents the state of Ohio on the Mississippi River Basin Panel of the national Aquatic Nuisance Species Task Force and the US’s upper Great Lakes region on the governing board of the North American Lake Management Society. Eugene was recently appointed as a Trustee of the Ohio Biological Survey, serves on the Olentangy State Scenic River Advisory Council, is the current Vice President of the Water Management Association of Ohio, and is active with several additional committees/councils and professional organizations. On the side, he moonlights as a classical musician and serves as Artistic Director of the Columbus Guitar Society’s concert series.