Home > blog > Tackling nutrient reduction BMPs for cold climates: A case of the Red River Basin of the North 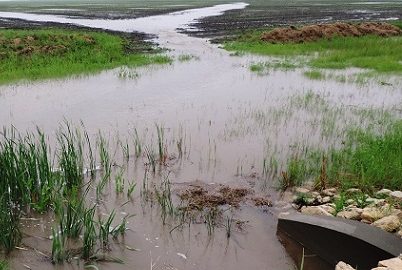 Nutrient reduction from agricultural sources through beneficial management practices, or BMPs, are a tenet of conservation and watershed management work. And while research questions remain, many agricultural BMPs are known to reduce nutrient runoff and keep water and nutrients in-field. But what about in cold climates? Are the BMP recommendations the same? That was the key question of a workshop in the Red River Basin of the North in April 2019 which was recently highlighted in the April edition of The Current webinar series.

The workshop was a large undertaking – planning started in 2017 and by the time of the workshop the planning committee had expanded to nearly 40 members. In total, over 90 individuals attended the workshop from both sides of the border.

The Red River Basin has several unique characteristics that complicate BMP effectiveness and make it a particularly effective case study. It is a vast region dominated by agriculture with a variety of cropping systems, ranging from wheat and other small grains to corn, canola, super beats, soybeans, and alfalfa. The basin follows the Red River, which flows north from Minnesota and North Dakota to Manitoba, Canada, eventually flowing to Lake Winnipeg. Moreover, the basin makes up two federal jurisdictions and four state/provincial jurisdictions adding geo-political complexities.

Following the workshop, two technical writers, David Mulla of the University of Minnesota and David Whetter of AgriEarth Consulting, developed an in-depth workshop report summarizing the information presented at the workshop, including the unique geographic, climatic and hydrologic context of the Red River Basin and the workshop discussions, areas of consensus regarding practice effectiveness, and future research needs. 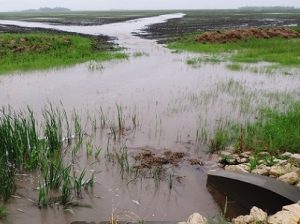 The report, along with two recently released factsheets developed with the help of the Network, were summarized in last month’s The Current webinar which featured Mike Ell, formerly of the North Dakota Department of Environmental Quality, who spearheaded the event; Jason Vanrobaeys of Agriculture and Agri-Food Canada, who managed the report development; and Mitchell Timmerman of Manitoba Agriculture and Resource Development, who helped develop the factsheets.

One of the factsheets outlines the BMPs that workshop attendees broadly agreed where highly effective in reducing nitrogen and/or phosphorus loading in cold climates. According to Jason Vanrobaeys, who presented at the April webinar, “in a general sense, those practices that had strong science support and high effectiveness, but were only site specific in nature were those erosion control practices. Those that had more broad support in the science and effectiveness were the nutrient management practices and structural practices that capture or minimize runoff leaving the field.”

The group also outlined research gaps and limitations of the current state of the science and noted several pressing research needs including investigating the magnitude of N and P transport to surface waters by wind erosion, the roles of legacy P and P transport to water bodies in the basin ,and the impact of N loadings from expanded subsurface tile drainage coupled with climate change.  These research gaps and recommendations are outlined the group’s second factsheet.

As for next steps, Mitchell Timmerman notes that the group is first, to share the report and factsheets with multiple audiences. Second, they will establish a next theme for the group to pursue, including moving from discussing effectiveness to discussing implementation and crafting common messages to producers regarding agricultural solutions to water quality problems in the region. Finally, they aim to collaborate widely with partners across the basin on research and policy.

For more information on the workshop, including the report, factsheets and presentations, visit the Red River Basin Commission website.