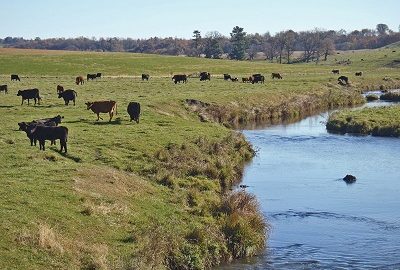 This year, Robin Salverson has collected and analyzed over 200 water samples from farms across South Dakota. Robin is a Cow/Calf Field Specialist with South Dakota State University Extension and coordinator of the Livestock Water Quality Program and according to her – this year was one of the busiest she has faced in 20 years.

“Water quality season for us is from April or May until about October when cattle are typically out on rangeland. This year, I was probably making 10 calls to farmers and ranchers a week about livestock water quality. It was a busy summer for sure,” notes Salverson.

Because of this Salverson is getting a lot of calls from folks east of the Missouri River. “This year I did more water samples east of the river than I have in the last 20 years,” notes Robin.

According to Salverson, a lot of folks in western part of the state have learned to be proactive over the years and test their water prior to cattle turnout. But in the east, many producers are facing issues for the first time and have not tested with as much frequency.  Because of this – she is often getting calls after an incident when producers are already facing a loss and might have less options to mitigate the damage. 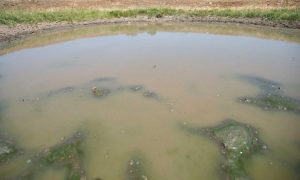 Example of a farm pond with algae. Photo by Robin Salverson

With water sources strained and high heat you can get high concentrations of salts, including nitrates and sulfates in your livestock water supply which can negatively impact production and reproduction Salverson explains. Poor quality water can impact weaning weight by 20-50 pounds and in some cases can cause animal death. Sulfates in particular can cause polio in cattle. Not to mention high sulfates tie up other minerals such as copper that are critical for animal immunity and reproduction. Of the 500 water samples taken through the livestock water quality program this year, 45% were above desirable levels for total salts.

Robin and her team are currently offering free on-site electro-conductivity testing throughout the state and she works to stress to producers that you can’t tell the quality of the water by looking at it. In fact, it can sometimes be deceiving because the clearest water can be the worst. “Water can be clear because nothing wants to live in it. If you see wildlife and fish – that is actually a good indicator,” notes Salverson.

Robin and her colleagues are working on getting electro-conductivity meters in place across the state so producers can them to their local extension office or regional center for testing. She is also collaborating with students on-campus to create protype sensors that can be put in dugouts and dams to do continuous monitoring that can then be automatically downloaded from a remote location.  These sensors, which will be field tested next year, would help provide continuous real-time information for producers on their water quality – a great advantage if they have a source with known issues.

Salverson notes that with testing, producers have better knowledge of potential issues and will know of issues quickly. That said, there is still not a good water treatment plan for the issues many producers face with their livestock water supplies..

But for Salverson, knowing about the issues and knowing how to be proactive to limit the damage is the critical first step.

Robin Salverson is a native of South Dakota growing up on a diversity farm in north central South Dakota.  After graduate school from Colorado State University, she spread her wings and worked in Ohio for Select Sires Inc., but returned to South Dakota and has worked for SDSU Extension since 2001.  First as a Livestock Educator in Harding County (Buffalo, SD) and most recently as a Cow Calf Field Specialist at the Lemmon Regional Extension Center.  She coordinates the Livestock Water Quality efforts in South Dakota, along with working in the areas of reproductive management, heifer development and women in agriculture programming.