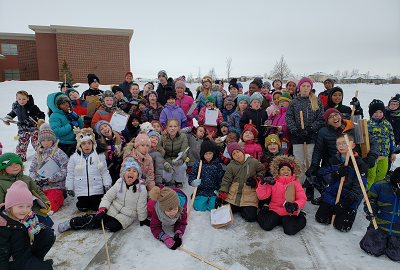 Becoming a climatologist was a natural fit for Adnan Akyuz because Adnan was always intrigued by the weather and climate and climate science was a particular interest because of its intersection with statistics and the way it allowed him to play with the numbers. Adnan took his first job as a post-doctoral fellow at the University of Missouri-Columbia in contract with the USGS Missouri Field Station to investigate the weather impacts on endangered plant species. The fact that the work involved rock climbing and repelling the sides of riverine bluffs to install weather stations that collected air temperature, humidity, and barometric pressure had him sold – climate science was his passion.

“It puts me in the front line with the data users and the clients in the field,” notes Akyuz, “That was a great reward and it’s a type of reward that you got immediately — helping the community.” The position also offered the chance to get back into research and education. 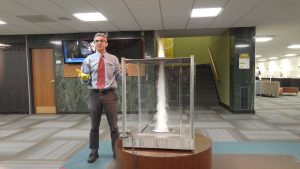 Adnan has now been working in Fargo, North Dakota since 2007 conducting research and teaching at North Dakota State University and performing climate services for the Department of Emergency Services for both the Governor’s office and state agencies. Akyuz notes that North Dakota is at the epicenter of climate change having one of the fastest increasing temperature and precipitation changes. “This puts me in the position where everyone wants to know the climate change impact on just about everything – energy, agriculture, or community” says Akyuz, “We are really in the midst of a big change.”

This change goes beyond assessing the data quantitatively. “The first few years I noticed that the wintertime precipitation had always been snow, and then we started seeing this change in February and in January we started having rainfall,” recounts Akyuz. “That change is there, and I don’t really have to demonstrate that with the data, I can see it.”

Akyuz notes that western North Dakota has been experiencing drought since mid-2000, which recently expanded to all portions of the state in 2021. This was the biggest year for drought in North Dakota and was the introduction into exceptional drought conditions. The ongoing drought has had serious implications for ranchers and farmers as they have struggled to provide feed and water for their cattle. Akyuz also notes that the 2021 growing season started with no moisture in the soil. “Some farmers had no choice but to seed into dust and dirt without any moisture to germinate the seeds.” This leaves a long-term impact in the area.

Akyuz is one of the information providers to the National Drought Mitigation Center, or Drought Monitor. He gets weekly input from Extension agencies in all 53 counties across the state. Akyuz notes that without the input from Extension professionals he would only be able to see the data quantitatively. Extension professionals are in close contact with the farmers and the communities and provide valuable information that Akyuz wouldn’t otherwise get. 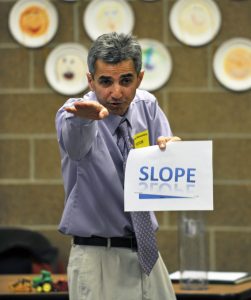 “We have a really good system in North Dakota and I’m proud to say that.” The information Akyuz inputs each week helps shape the Drought Monitor map, which he updates the counties and communities about. “When communities see that they are making a difference, they are more motivated to provide the feedback for the following week.”

When Akyuz was at the National Weather Service, he didn’t know who was using the data or what it was being used for. For Akyuz its about being face-to-face with the community, providing the information to farmers and asking them how or if they will use the information in their farming practices in the next growing season.

“It is really rewarding working with the state government, and especially with the Governor’s office, in declaration of drought disaster or in requesting federal aid for disasters such as flood, severe thunderstorm, heavy snow fall, or impact of the drought. Providing that information for the state so that the people who are really hurt by that disaster can qualify to mitigate some of the impacts – that’s what it’s all about.”

Adnan is born in Tarsus, Turkey. He is married and has 2 children. Adnan enjoys spending time with his family camping, kayaking, x-country skiing, rock climbing and taking “long” road trips.