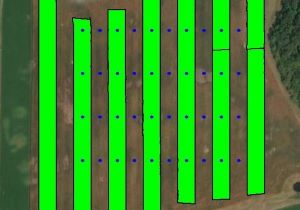 The Missouri Strip Trial program had its beginnings in 2016 in response to Missouri grower questions concerning the use of cover crops in their crop rotations. Producers were curious about cover crop stand establishment, species to use, spring termination strategies and the impact cover crops have on cash crop yield.

These producer questions spurred initial strip trials where cover crops were incorporated into producer fields in order to compare:

Data collected from these trials has included:

Initial results from the cover crop trials have shown that soybeans are more adaptable to cover crops than corn with producers becoming comfortable with planting soybeans “green” into a cover crop. Early corn yields at some sites had up to a 15 bu. yield reduction following cereal rye, however more recently the yield reduction may be minimized due to improved producer management skills and multiple years of using cover crops.

The use of winter wheat at these same sites shows that its effect on corn yield was less than that of cereal rye. Producers are also reporting a change in weed pressure when using cereal rye prior to soybeans with a reduction in species such as marestail and waterhemp.

With the results of these initial trials, the program will be adding a third cover crop trial in the fall of 2020 to look at the comparison of soybeans planted “green” into cereal rye and a no cover control. This trial will look at how this high carbon residue will affect the following year’s corn crop and the longevity of the residue in the following corn crop to provide erosion control. Also, weed pressure will be monitored the first year during the soybean crop in addition to collecting cash crop yield.

Today the Missouri Strip Trial program has secured additional funding to do trials related to:

The overall goals of the Missouri Strip Trial program are to:

Additional information on the Missouri Strip trial program can be found at https://extension.missouri.edu/programs/strip-trial-program/strip-trial-about

Charles Ellis is a field specialist in agricultural engineering with the University of Missouri Extension.  Through his work, Ellis builds relationships with producers, refines trial protocols, plot layout,  in-season scouting, yield data collection and data transfer. He works primarily with crop producers on a individual basis to collect yield data, guidance systems and operation, data transfer and analysis, and equipment selection. He also serves as the Missouri representative to the Midwest Cover Crops Council where he serves on the executive board.