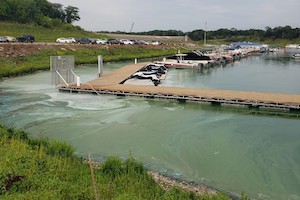 “Think Downstream” is more than a tagline for Des Moines Water Works; it’s a way of doing business, a way of thinking about the legacy the utility leaves future generations. It’s taking responsibility for the offsite, downstream effects to people who live in the watershed the utility serves.

Almost half a million people in central Iowa are running out of options for source water. Drought and harmful algal blooms, the latter caused primarily by agricultural land-use practices that deposit nitrogen and phosphorus into our rivers, degrade our two main water sources, the Des Moines and Raccoon Rivers.

Thick blue-green algae coat the shores of Saylorville Reservoir, a drinking water source for Des Moines Water Works (DMWW) that is fed by the Des Moines River, shutting down beaches for recreation and threatening the water supply for the metropolitan region. Every year, between 25,000 and 58,000 tons of nitrogen flow past the Water Works’ intakes.

Despite being surrounded by two large rivers, DMWW, the largest water utility in Iowa, is searching for new sources of water for residents in the nation’s caucus capital. The utility hopes to engage uncommon collaborators, as well as state and federal policymakers and agencies to expedite restoration and protection of Iowa’s surface water.

That’s why DMWW has created the “Think Downstream” public information campaign, which is designed to educate its customers and others that their source water isn’t getting better and advocating for source water protection is important. Each week, DMWW tells its story through social media platforms of the downstream effects of land users upstream; the work the utility does to improve water quality and make it drinkable to its 500,000 customers; and how the utility is planning and investing millions of dollars to engineer, build, and expand treatment facilities, and to find other sources of drinking water. (Follow the campaign #dsmh2o on Instagram)

Public education can’t be the only way to look to the future, however. DMWW is now creating opportunities to connect the dots between watershed residents and create bonds with unexpected allies – e.g., agricultural retailers, farm groups, and farm managers – to improve source water quality in its watersheds that, hopefully, will improve conditions for those even farther downstream.

But first, it’s worth noting a few of the complexities of the challenge central Iowa is facing.

One big challenge is that drainage law in the Iowa Code is more than 100 years old. It allows for one thing: Move water quickly off the landscape. In doing this, nitrate from farm fields is carried with the water into public waterways, eventually arriving at the Gulf of Mexico and contributing to the Hypoxia Zone.

In 2015, DMWW filed a lawsuit against tile drainage districts in hopes of curbing nitrate that flows into surface water from farm fields in the northern part of the watershed. The suit was dismissed, and DMWW customers continue to foot the bill for millions of dollars in upgrades and expansions to ensure safe drinking water.

Another big challenge is that the pace of source water contamination may outpace the ability of DMWW to keep ahead of the nutrients.

The utility is currently investigating the construction of a $30 million alluvial wells project along the Des Moines River that would give the utility access to cleaner off-river water supplies. In order to meet regulatory standards, DMWW is pressed to fund, plan, build, and invest in more and bigger facilities in order to remove new and/or emerging contaminants. Utility officials worry that DMWW won’t be able to “engineer” its way out of the onslaught of nutrients—the key is to stop the nitrogen and phosphorus before it reaches the rivers.

What is more, the Iowa Nutrient Reduction Strategy, the state’s policy for water quality, lacks a timeline or benchmarks for achieving reductions and adequate funding mechanisms, and it relies on voluntary compliance for nonpoint source reductions. Meanwhile, the lion’s share of nutrients in waterways is contributed by agricultural land practices.

In lieu of lawsuits, DMWW is working to do what it can to encourage nutrient runoff reduction and serve as the “voice of water” with its pro-water, pro-public health mission.

This summer, the utility launched a webinar series designed to be a “landowner boot camp.” DMWW’s partners are a farmers’ cooperative, a sustainable farming nonprofit, and a private land management company. The goal is to connect the dots for landowners who drink DMWW’s finished drinking water with the practices their tenants use on their farmland that affect the watershed and customers downstream.

Helping farmers in the Raccoon River Watershed adopt conservation practices is also critical. In many areas, less than 1 percent of farm ground is held in place by cover crops. That is why DMWW has partnered to help finance a $600,000 cover crop seeder as part of a pilot project with other municipalities and private businesses. The hope is that the pilot program proves cover crops are a viable business model for agronomists and cooperatives that can be scaled up and expanded across the state.

DMWW has also launched a “nutrient collaborative” that will build a community of public water systems that must treat nitrate in source water in order to produce safe drinking water. The utility hopes to provide educational resources, networking opportunities, and case studies of success with landowners to protect sources of drinking water.

Another recent effort that DMWW staff have been involved in is the formation of an informal “water quality education work group” with well-known organizations in the Des Moines metro area. The work group – which includes the Science Center of Iowa, the Des Moines Water Works Park Foundation, the William G. Stowe Foundation, and the Greater Des Moines Botanical Garden – are making plans to educate and engage the public to learn about watersheds and the importance of thinking downstream.

At the federal level, DMWW staff have been telling their story about battling HABs to nonprofits, Mississippi River coalitions, the Environmental Protection Agency, the NRCS and USDA, the U.S. Army Corp of Engineers, and their Congressional delegation in hopes of shining a spotlight on the potentially catastrophic consequences of unchecked HABs in source water.

While DMWW is committed to this work, the utility can’t collaborate its way out of watershed impairment. Recent court decisions have put the onus for cleaning up Iowa’s waterways squarely on the shoulders of the state legislature.

Des Moines Water Works hopes advocacy for clean water, coupled with public demand and working with like-minded individuals and organizations through uncommon collaborative efforts will begin to shift the balance. Keeping nutrients, soil, and manure where it belongs — before it ever reaches our rivers and streams — is the solution and is a value captured in “thinking downstream.” 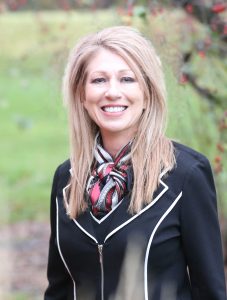 Jennifer Terry’s passion for protecting Iowa land and water was sparked by her parents, progressive dairy farmers from central Iowa. In 2013, Jennifer received her J.D. from the University of Iowa College of Law, and she has worked exclusively since that time to build and strengthen coalitions and policy to restore and protect Iowa water ways. She is the External Affairs Manager for Des Moines Water Works where she oversees public relations and government affairs.